A central question driving E. Dawson Varughese’s work is: are we moving beyond the postcolonial? Her 2008 – 2011 World Englishes Literature (anthology) project investigated this possibility through fieldwork in East Africa, West Africa, India, Singapore and Malaysia. The findings of this international research project are published in Beyond The Postcolonial: World Englishes Literature (2012, Palgrave).

More recently, E. Dawson Varughese’s research on post-millennial Indian literary and visual cultures explores the encoding of modernity and the over-arching question of being beyond the postcolonial – please click on the ‘New India’ tab on the main menu for more on this work.

The ‘anthology’ project started in 2008 with fieldwork in Cameroon and Nigeria where she met with writers, researchers, students, readers and artists in order to research emerging Anglophone literature ‘on the ground’. Field research was conducted in each country from which an anthology is published.

In launching an ‘open’ Call for new previously unpublished writing in English through email lists of writing groups, university departments, cultural and art-based community organisations, Emma compiles and edits anthologies of short stories with a critical introduction. The Call is ‘open’ in the sense that no direction on the type of stories sought is given, the Call only ever asks that the writing be concerned with ‘Cameroon’ or ‘Nigeria’ or ,’Malaysia’ etc .. .

Cameroon, Nigeria, Uganda, Kenya, Malaysia, Singapore and India were involved in the fieldwork and five anthologies of new writing were published from five of these countries.

All the stories received were considered as ‘data’ to inform the investigation of being beyond the postcolonial. An overview of the World Englishes Literature project can be read here. (Transnational Literature, May 2011) and there is a further paper on the findings from the African fieldwork entitled Emerging Writing From Four Four African Countries: genres and Englishes beyond the postcolonial see: African Identities (January 2012)

The findings of the anthology project as a whole are presented in ‘Beyond The Postcolonial: World Englishes Literature’ (2012, Palgrave). 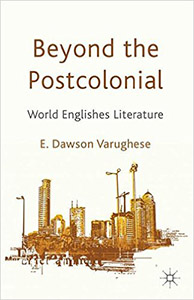 Discussion on some of the findings can be heard on an interview with BBC World Service ‘The Strand’ (Feb 2011), click on the link below: